Apricot production to fall by at least 50% in Murcia

With the exception of some varieties, much of the apricot production in the Region of Murcia is expected to be reduced by about half due to poor flowering, according to some producing companies in the sector. This has been confirmed by the Association of Producers and Exporters of Fruit, Table Grapes and Other Agricultural Products APOEXPA.

"This year, there will be quite a noticeable drop in the apricot production in the Region of Murcia. Early apricot producing areas such as Cieza, Abarán, Archena or Lorquí, among others, are reporting a remarkable loss of flowers in apricot trees, of around 50%," said Antonio Caballero, manager of the Murcian producing and exporting company Frutas Torero, based in Abarán, Murcia.

"Although the extent of the losses has yet to be estimated in northern areas such as Caravaca or Moratalla, where the flowering takes place later, producers there also report a significant fall of flowers," he says.

According to the producer, it is not yet known with complete certainty why this is happening, but it is most likely due to a lack of pollination by bees. "We believe that most of the flowers have fallen because they have not set, since the bees haven't pollinated them. In some varieties, the flower has not even opened, even though the flower buds had formed."

The Region of Murcia is the largest apricot producing area in Spain, although in the last two years, the acreage has been reduced due to several price crises. "A significant number of plantations have been uprooted, and some of those had not even yet become fully productive," says Antonio Caballero.

Due to the storm and frosts recorded at the beginning of the year, the apricot harvest is expected to start a little later, between April 20 and 25. As for the other stone fruit species, such as peaches, nectarines, flat peaches and plums, the flowering is progressing normally and without setbacks, so as long as there are no adverse weather conditions, a good harvest is expected. 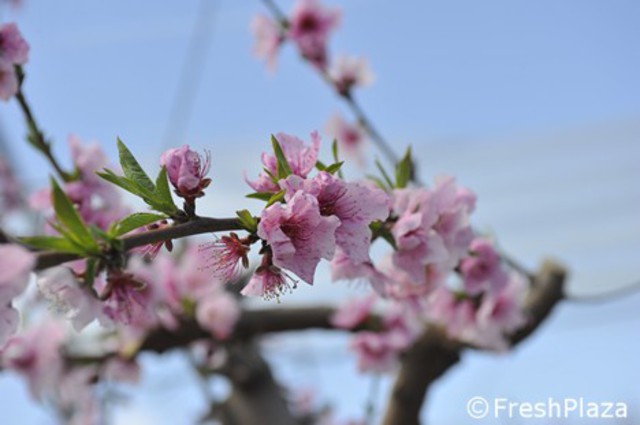