It is time for protected fruit tree orchards

An innovative thought by Stefano Lugli, an Italian researcher

Following the frost in mid-March 2021, last week's frost caused severe damage to the productive potential of northern Italy. Stefano Lugli, an experimenter at the University of Modena and Reggio and breeder of some of the most famous cherry varieties, illustrates his point.

"I think the time has come to think about producing fruit in a protected environment to avoid unpleasant surprises. We started years ago to deal with hail problems, then we moved on to protection from rain and insects. We also need to include protection systems from late frosts, as it is an increasingly common phenomenon. "

Nylon covers against rain, insects, hail and frost should also be used for cherries, kiwis, peaches and apricots in the north. Not so much to speed up the harvest, but to protect the crops.

Lugli referred to two frost protection systems recently used in two orchards in northern Italy. In the first case, a special membrane protects against external factors while the irrigation under the canopy helps to maintain the temperature slightly higher (2.5 ° C) than in open fields. In the second case, irrigation is carried out above the canopy and outside the membrane so as to create a kind of "igloo" that protects the plants with a difference of 6-5 ° C.

It is a significant investment, but European and regional resources must go in that direction. "In fact, the insurance system predicts that the state will pay most of the premium to companies, but there is no return to society and the local economy, let alone to growers and, in part, to businesses. If the funds were used to finance investments for the physical protection of the fruit, we could offer work to the whole chain with a significant economic return for the state," explains a producer. 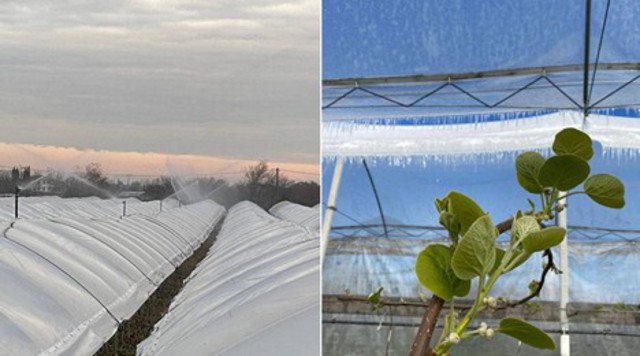